Read the article in Italian

How about starting with some of the issues that emerge from your book The Emancipated Spectator? In the classical concept of cinematographic and theatrical performance there is always a connection between the scene, or the screen, and the spectator. This connection is brought into question by what you call the aesthetic regime of the arts, which nds discordance and disagreement as characteristics of the composition. In cinema, disagreement can be seen between: the visible and the expressible, image and sound, sensible and intelligible; but also, if we think about what you wrote in Film Fables, between fables and vision; between mythos and opsis. In what way does the notion of the mimetic regime of the arts develop through disagreement, discordance, interval, remainder?

Let us start with the general issue. I think that the representative regime of the arts is a regime of agreement on more levels. For example, it can be agreement between a subject and the way it is represented, or between the way of treating a particular subject and the general information of sensibility which are organized according to a given preference. The mimetic regime is fundamentally based on the idea that there are ways of expressing oneself which correspond to the thoughts and feelings we want to express; that there is a sort of vocabulary, or grammar reference of expressions that can be immediately intelligible. I am thinking, for example, about the types of expressions provided by painters like Le Brun who have the possibility to immediately transcribe graphically every thought and every feeling through facial expressions. More generally, the representative regime is regulated by a sort of agreement between the transmission of thoughts, the presentation of sensible forms, the reception of these forms, and consequently, the reception of the ideas and the messages that are transmitted by the sensible forms. In relation to this, the aesthetical regime of the arts is by definition a regime of non-relationship. Most importantly, the aesthetic regime removes all the codes which define regimes of expression belonging to specific thoughts and which, more generally, also de ne a relationship of concordance between norms of production and forms of reception. […]

Does your interpretation of the cinematographic dispositif take into account the changing forms of representation? If we think about Hollywood movies, we realize we are dealing with dispositif that are built to influence the sensibility, the interpretation, the emotions of the spectator. Is it possible to nd, inside different forms of the same dispositif, different spaces of freedom? With Bresson, freedom and the possibility of emancipation work a little differently. With regard to the issue of the cinema spectator, is there a difference between classical and modern cinema?

It is complicated to understand exactly what is meant by classical or modern cinema; on this topic, I do not agree with Bazin or Deleuze. Actually, there are always different types of associations; a Hollywood movie is always a sort of compromise. In general, traditional Hollywood cinema does not present strong forms of disagreement but there always are different ways of organizing the notion of the sensible. There is a first level of negotiation; it is very clear; it is the one between filmmakers and producers. Clearly, if we take an example of classical cinema such as John Ford’s, we always and moments of distraction. Moments that escape the logic of the effectiveness of action and go towards a typology of characters or towards scenes of pure diversion. Just think of the character who thinks himself as a Shakespearean actor in My Darling Clementine. It does not have anything to do with the tragic plot, but it shows the freedom the filmmaker has as an artist. Consequently, these films are a sort of aleatory connection where there is always the possibility that our gaze may suddenly stop upon a detail of a picturesque figure, or that we may linger upon the face of a woman. They could be considered a sort of untold story within the movie. They are always there. Even Hollywood movies have deviations of this sort: things that are extra with regard to the logic of the narrative, and thus several ways for the spectator to be taken in by the sensible logic of the story. With Bresson, something different happens. We find ourselves in a situation where the director claims to be entirely responsible for every element of the film. In a way, then, the spectator should be a total prisoner, more so than a spectator of a Hollywood movie, who is always a bit messy. Nevertheless, if we take a film by Bresson (for example Au hasard Balthazar or Mouchette), the very fact that every element is calculated in a way so as not to create its own meaning, except by the bond with all the other elements, assures that every element can be isolated by the spectator. The spectator can stop his gaze on Anne Wiazemsky’s hand, and next to her, on a detail belonging to Balthazar, or on Nadine Nortier’s black hair in Mouchette. The spectator can stop on all the small elements which have a role in the plot, but which can also be isolated and be considered valuable as such. In the end, different conditions of re- association are created starting from the links or from the disassociations that the filmmaker has brought into play. […] 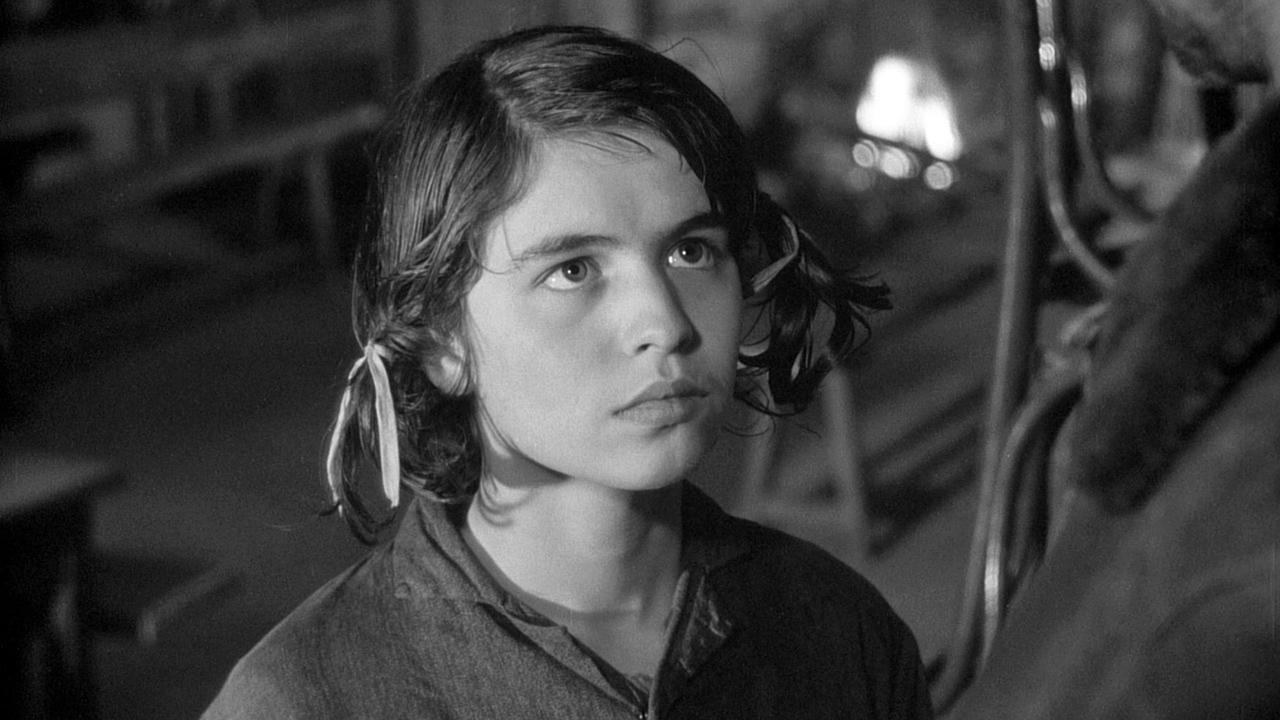 I think it is very important to emphasize the difference of criteria, and not of nature, between Hollywood and auteur cinema. If we think about Plato’s Allegory of the Cave, we find this exact ontological difference, which is also the basis for a type of politics, between two types of images: on the one hand, the projected images in the cave, on the other, the true images, the things that are outside. Perhaps, this is a dispositif – the distinction between two types of images, the real ones and the false ones – which is at the basis for the distinction between people who have access to reality and the others who are tied up in the dark theatre. I would like to ask you whether you think that, in politics, the idea of a difference between consensual and dissentual dispositif should be abolished. It seems to me that in your more recent works you focus mainly on the several partitions of the sensible and you have a tendency to tone down, for example, the opposition that appeared in Disagreement between police and politics.

Let us start from the distinction between police and politics. Like with all the distinctions I try to make, it is a way of thinking about complexity. I will try to establish some distinctions to identify useful tools to understand situations which in reality are situations of mélange. Already in Disagreement there is nothing that specifically belongs to politics or to the police; the objects are constantly divided, always on a line of tension. Politics defines and creates itself as such through the use of a police dispositif, a certain way of building and redistributing public spaces (the space of power, the road, the place of work, the hospital and so forth). Politics tries to reconfigure something that has already been configured in a certain way by the police. The police is a type of organization of the sensible, an organization which lends itself to whole series of movements and reconstructions. […]

I would like to return to the issue of the partitioning of the sensible which aesthetics shares with politics. Is every reconfiguration of the sensible – what you call the dissent of sensoriality – always a political operation or do police recon gurations of the sensible exist? Are there any signs, if we can say it like this, that separate the work capable of recon guring sensibility from the one that goes towards consensus?

I do not think it is necessary to ask ourselves – with regard to every sensible creation – how police and politics are organized. We can say that every artistic creation constitutes, in its own way, a certain form of common sentiment. Every time common sentiment is transformed, we are operating in the field of politics in a broad meaning. Every artistic form constantly works in the configuration of common sense, but it is not the type of reconfigurations put into place by collective subjectivation, which is politics in the real sense of the word. Think about, for example, the work of reconfiguration of the world in modern novels. It breaks all the consensual forms which go towards a general depersonalization, a destruction of every sort of subjectivity which could create a we; a we which would show itself as such. This allows for the creation of a novel – from the middle of the 1800s to mid 1900s, the great period of the novel – where there constantly was a parallel between the forms of political collective subjectivation and the forms of destruction of a common sentiment. These were, at the same time, similar to a denial of every possible form of recon guration of an I or of a we. Consequently, we can say that every artistic creation can be considered political in the way it creates a common sentiment, and, at the same time, in the way it creates forms of common sentiment which dissent or are in disagreement with other attempts to create a common sentiment, like that of a political subject who puts forward an idea for a possible world. […]

Would it be misleading, then, to say that art is political when it is capable of imagining a world in the future, and is it police-like when it only describes or depicts the world just the way it is?

We could say that art is political in the way it modifies the positions constituted in a sensible universe. A film by Pedro Costa is political mainly because it modifies, at the same time, the visibility of the places of poverty and the position of the victim, of the worker, of the immigrant in the landscape created by consensus. Consensus constitutes something like a medium-landscape of designation of the sensible: designation of the center and the outskirts, of wealth and poverty, of the capacities and incapacities and so forth. It is something that can be relatively shared. It is something that de defines a system of information, of possible stereotypes, of representation, and so forth. Politics starts when things get messed up in this game. It starts when a filmmaker goes somewhere to find beauty in the world – even in a world which is normally seen as of misery and dissolution – in order to create a heroic, tragic, enigmatic figure instead of one who is entirely defined by its being a worker, immigrant, unemployed and so forth. What is after all a police order? We could say that a police order is a type of consensual constitution of the designation of places, of the characterization of groups, of individualities, of their potential possibilities and impossibilities. This deals, a little, with what I once said about the distinction between documentary and fiction starting from Godard’s famous sentence “La fiction c’est pour les Israéliens, le documentaire c’est pour les Palestiniens”. It is like saying that the poor, the oppressed and the victims cannot afford the luxury of fiction. Together with them, we cannot have the luxury of making fiction because respect, deference and so forth compel us to document their situation. Art becomes political when it alters this designation of roles.