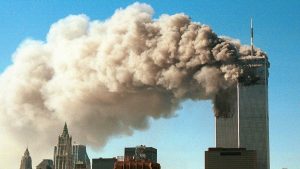 In the week leading up to today’s 20th anniversary of 9/11, US-based print, televisual, and networked media screens have been filled with sounds and images from that now historic day. These annual commemorations function to honor and keep alive cultural memories by remediating what has been widely understood as both an unprecedented terrorist attack on US soil and as the ultimate global media event. Commemorative mediation has its own double logic. In remediating an event that happened twenty years ago, commemorations invariably treat 9/11 as a single, self-contained day, epitomized in the title National Geographic’s new 20th anniversary docuseries, “9/11: One Day in America.” Of course 9/11 was not just any day, but the day that “changed everything,” reflected in the Netflix 20th anniversary commemorative series, “Turning Point.” The idea of 9/11 as a moment of radical change recurs in numerous recent articles in print and online newspapers and journals:  “20 Years Later: 9/11 Changed Everything, Including Movies”; “How 9/11 Changed Travel Forever”; or “For the Defense Industry, 9/11 Changed Everything.” These 20th anniversary commemorations also mark a historical divide: before and after the event of 9/11.

In addition to prompting and rehearsing remembrance of an event that demarcates an era in the nation’s history, these commemorative remediations also make 9/11 present again. Remediating sounds and images from that transformational day brings 9/11 alive as part of a nationwide effort to commemorate and memorialize the day that changed everything. To commemorate the 20th anniversary of 9/11 is simultaneously to isolate it from the present as something that is over and done with (it has already occurred in the past), and to bring alive once again the stimmung or mood created by that total media event. Even if 9/11 has passed, commemorative mediations function to keep alive not only its memory but also the individual and collective affectivity that was generated that day.

But the double logic of these conventional media commemorations should not blind us to the ways that 9/11 has never ended and is still ongoing today. On April 14, for example, the Biden administration announced that the US would withdraw its forces from Afghanistan by September 11, 2021. The timing of the US withdrawal frames it as a different kind of 9/11 commemoration, marking the completion of the post-9/11 strategic mission that prompted the US invasion of Afghanistan twenty years earlier. Biden specifies the withdrawal’s link to 9/11 again in remarks on July 8, 2021:

On August 14 he reiterated this point in an update on the uneven progress of the US withdrawal: “America went to Afghanistan 20 years ago to defeat the forces that attacked this country on September 11th. That mission resulted in the death of Osama bin Laden over a decade ago and the degradation of al Qaeda.” Rather than a televisual documentary, the Biden administration appears to have sought to commemorate the 20th anniversary of 9/11 through the withdrawal of US troops from Afghanistan, remediated and premediated across print televisual, and networked media.

But live television is not without its risks. As commemorative mediation the withdrawal from Afghanistan did not go smoothly.  The Afghan government and military, which had been propped up by US forces for years, collapsed in a matter of days—not weeks or even months as the Biden administration had expected. And then on August 26, Islamic terrorism reared its ugly head again at the Kabul airport, where a suicide bombing attributed to ISIS-K killed at least 182 people—169 Afghan citizens and 13 members of the US military. When Biden addressed the American people that evening, the import of his words and the tone in which he delivered them reminded the world that the surveillance and counterterrorism regime inaugurated in the aftermath of 9/11 had never ended.

Biden’s August 26 speech telescoped in function and tone two of George W Bush’s most notable public speeches after 9/11: his remarks of condolence and remorse on the night of the attacks; and his speech to a joint session of Congress on September 20, in which he established the Office of Homeland Security and issued the ultimatum to the Taliban that served as precursor to the Afghanistan invasion. In the first half of Biden’s speech about the ISIS-K attack on the Kabul airport, his trademark empathy for US military and Afghan families who had lost their loved ones echoes Bush’s speech to the nation on the evening of 9/11. Mid-way through Biden’s speech, however, his tone hardens and we are back at Bush’s commencement of the War on Terror in 2001:

To those who carried out this attack, as well as anyone who wishes America harm, know this: We will not forgive. We will not forget. We will hunt you down and make you pay. I will defend our interests and our people with every measure at my command. . . .  We will not be deterred by terrorists. We will not let them stop our mission. We will continue the evacuation. . . .  We will respond with force and precision at our time, at the place we choose and the moment of our choosing.

Twenty years earlier, in his September 20, 2001, speech, Bush had issued a similar threat in a similar tone to a joint session of Congress that included Senator Joseph Biden of Delaware: “These demands are not open to negotiation or discussion.  The Taliban must act, and act immediately.  They will hand over the terrorists, or they will share in their fate.” 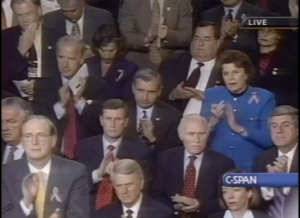 These two presidential ultimatums, reverberating over the course of two decades, remind us that 9/11 is not an event that should be relegated to the past but is still ongoing today in what we might call “the long 9/11.” To think of the long 9/11 is to reject the traditional forms of mediated commemoration which frame the event as a single day that happened twenty years ago.

In bringing together Bush’s September 20 speech to Congress in the immediate wake of 9/11 with Biden’s speech after the August 26 suicide bombing, I do not equate the two acts of terror in scope or scale. But in linking Biden with Bush I am not being metaphorical or analogical either. Biden had been a strong supporter of Bush’s post-9/11 counterterrorist agenda. But it would be wrong to say that 9/11 initiated Biden’s concern with counterterrorism. In the aftermath of the 1995 Oklahoma City terrorist bombings by white supremacist Timothy McVeigh, Biden had sponsored a counterterrorism bill, key sections of which were recycled in the 2001 Patriot Act. Biden was known to have been disappointed, however, that key sections of Bush’s 2001 legislation left out some of the stronger provisions of his own 1995 bill. Although Biden’s 1995 counterterrorism bill failed to become law, he was by no means alone in his pre-9/11 concern with counterterrorism.  As this Google N-Gram for the phrase “homeland security” shows, the phrase began to be more commonly used in the period between 1995 and 2001, even before 9/11. 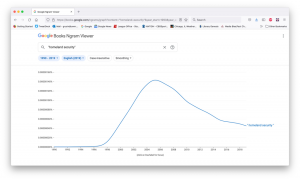 Not only does 9/11 still live on some 20 years after the attacks on the Twin Towers, but at least in terms of the regime of counterterrorism and securitization, 9/11 precedes these attacks as well. To consider the US withdrawal from Afghanistan together with the 20th anniversary of 9/11 is to let us begin to recognize some of the ways we are still living in the shadow of the Long 9/11.