Five books, but above all Bazin

The books to think and to love cinema. 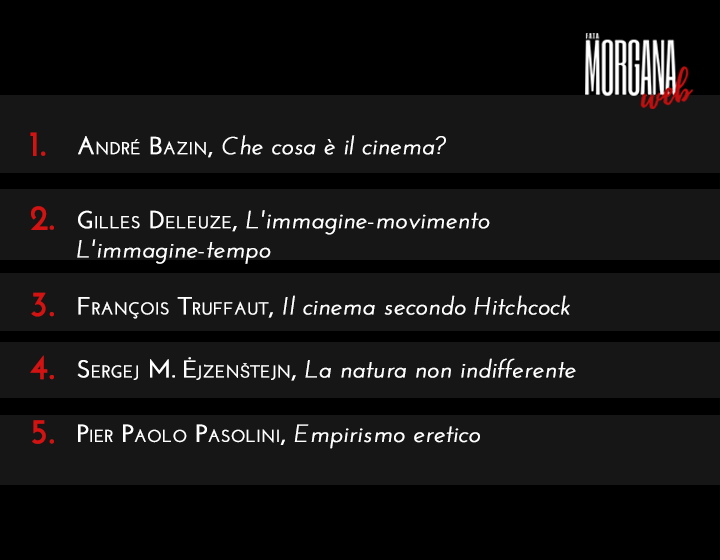 Asked by Fata Morgana Web on the five books that have marked their knowledge and their love for cinema, scholars, critics and Italian filmmakers have chosen their livres de chevet, often arguing the reasons for their selection. What has emerged, beyond the peculiar and sometimes happily curious choices of each participant? Let us try to summarize in some points what comes out of the ranking of the first five books and the overall choices, which represent something that goes far beyond a mere question of preference:

♦When we get to the point and try to circumscribe the perimeter of a territory that has been studied and loved (and that we continue to study and love), this operation tends to return to the “classics”. The classic is not what establishes the canon, but it is what conveys that territory in the richest, most complex, and therefore vital, way. It is therefore a return that opens to the future. This is the meaning of the presence, among the five most voted books, of André Bazin (What is cinema?, 25 votes), of the two volumes of Gilles Deleuze on cinema (The Movement-Image and The Time-Image, 14 votes), of Truffaut (Truffaut, Hitchcock, 13 votes), Ejzenštejn (Non-Indifferent Nature, 10 votes), and Pasolini (Heretical Empiricism, 7 votes). Although many other “classics” have been voted, starting with Epstein and Balázs.

♦Beyond those caused by contingencies and fads, what seems to remain is an ontological question, too quickly dismissed in favour of “functional” (how does cinema work in new contexts? Which devices does it actualize?) or eschatological (will cinema live or die?) ones. The relevance of these questions can remain so if and only we consider them as ways of expression of the ontological question: what is cinema? This is not only what Bazin and Deleuze asked themselves, but also Pasolini (the only Italian who entered in the first five) and Ejzenštejn (although in the latter case – unlike the other three – ontology digresses in anthropology).

♦Thinking and writing about the cinema means interweaving cinema to films. Directors and critics do it by destiny and profession: they have been indeed the most voted. There is a clear dominance of texts of poetry, breviaries, memories, reflections on cinema by filmmakers (beyond the first five, we find Bergman’s The Magic Lantern with 6 votes, but also Epstein, Bresson, Godard), and by critics (besides Bazin, Serge Daney with 7 votes, however distributed on more books). On the other hand, however, there are only a few texts of a general theoretical nature in which the film is taken care of only as an exemplary object, or is drowned in unlimitedly extended categories (such as, for example, that of the visual).

And again, two texts (with 4 votes each) that read two fundamental national cinematic traditions respectively, such as the American and Italian one: Michael Wood’s America in the Movies, and L’avventurosa storia del cinema italiano, edited by Fofi and Faldini. Among the curious choices are those of who opted for novels or narratives, confirming that the key to the understanding of an art can also (although I would say often) come from other arts. But all this still does not capture what is the predictably disruptive element of this vote. A book and an author stands out in particular: André Bazin with What is the cinema? and his 25 votes (more than 50% of the 42 participants).

Why Bazin? Why still Bazin (to whose tradition belong, to remain to the first five books, also Truffaut and Deleuze)? Why Bazin again, when his Écrits complets are being released in these days (and will be presented tomorrow at the conference in Palermo) and an issue of “Critique” is being dedicated to him?

This is the real question, which we will briefly try to answer. If the cinema has also been influenced by the debates and speeches about it, in the key moment of cinematic modernity, after World War II, after the war ravages and dictatorships, Bazin was able to adopt modern cinema and to place it in a symbolic tradition in which the novelty of the expressive forms met the essence of cinema tout court. An aesthetic expressed an ontology: the realism of the forms expressed the ontological realism of the cinema. Bazin’s reading of Neorealism revealed, for example, how the extraordinary novelty of Italian cinema of the time lay in the ability to restore reality in all its density, opacity, randomness and concreteness. Such conveyement of reality determined a gap with the abstract découpageof classical cinema and realized what was the specific strength of cinema: giving the word to the world as a world, to the fact that «the world is, quite simply, before it is something to be condemned» (Bazin 2004, vol. 2, p. 21).

If the truth of an art (like of an individual) emerges in the middle, at the stage of maturity, it is precisely at the turning point after World War II, in a critical historical and social context, that we see the truth of cinema emerge through the contingency of a new form, in the gap between what had preceded it (“abstraction”, “expressionism of the montage and image”), and what until then had emerged only through karstic form (in Stroheim, Murnau, Renoir). This truth – should be reiterated – lies beyond the dramatic balance of the genres or the symbolism of the forms. It lies in the revelation of a real singular that appears in films as a deviation (between an image and the other, the visual and the sound) and as the questioning of the action, replaced by the wandering and the clairvoyance of characters whose gaze on the world intercedes that of the author (according to Deleuze).

«Today [and we are at the beginning of the fifties] we can say that at last the director write sin film. […] The film-maker is no longer the competitor of the painter and the playwright, he is, at last, the equal of the novelist» (Bazin 2004, vol. 1, pp. 39-40). Focusing on the powerful but “not true” character of classic cinema, in the “weakness” of modern cinema (not only in the “poverty” of Neorealism but also in Welles’ aesthetics of the un-finished) Bazin saw the emergence of a truth of the cinema entrusted to the “writing” of things, to a gesture that meets, contemplates and thereby establishes the world, regardless of any representative model.

Regardless of the Aristotelian “ontology of praxis” (used by the American schools of screenplay), and through a (alternative) “bergsonienne” ontology of reality and duration, as he will say referring to Le Mistère Picasso, such new cinematic ontology, resumed and radicalized years later by Deleuze, not only defines an alternative model to the “practical” one, but also what the cinema has of more specific: the truth that inhabits the film and that presents itself beyond the story and the action told. The case of the child in Bicycle Thieves remains exemplary: «Remove him, and the story remains much the same», he writes (Bazin 2004, vol. 2, p. 53). However, he adds, the meaning of the film would radically change, the story of the robbed worker would lose all its “ethical and moral dimension” (conveyed by the child’s gaze on what happens) and would become a mere social drama.

To conclude, Bazin not only holds “the whole cinema” together, in the transition from the classical period to modernity, but also shows the difficult and contrasting emergence of its truth. And he does this in a close-bodied body with the film. Bazin is not just a critic, therefore, and he is much more than a theorist. Bazin – as well as who followed him in the tradition of the “Cahiers” – is the one who largely made the cinema be what it is. He adopted and led it into its adult phase, making it different, rich and complex, opposing those who continued to consider it as an infant and placed it under strict ideological categories (think of the reading of Neorealism made by much of our most authoritative critics of the time). For this reason, we continue to love his work, to read it and to quote from it (even if in some cases we thought of it as an obsolete object). And for this reason we hope that, at least now, some courageous publisher will have the desire and the strength to translate his Écrits complets. It would not only be a tribute to the greatest film critic, but to cinema as an art and form of expression that fully concerns our lives and our present.